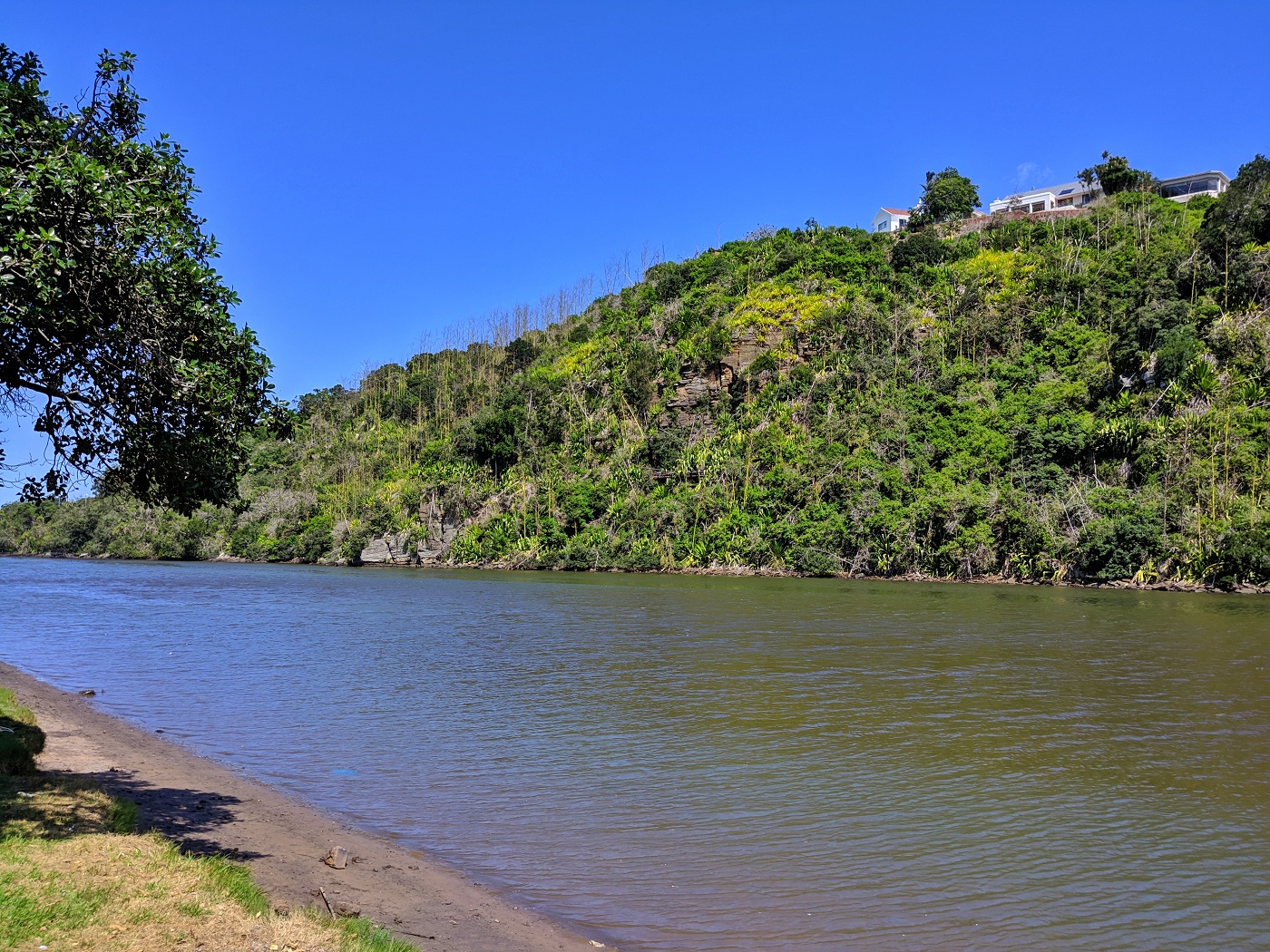 When I told the team at Exquisite Coasts that I was planning on visiting East London in South Africa they looked at me as though I was crazy.

Well, I wanted to check out the nearby beaches (some of the most stunning in South Africa), but I also wanted to find out more about this city with the weird name.

It didn't disappoint. It turned out weirder than expected.

To describe the downtown and the Quigney beachfront areas of the city I ask you to imagine a faded 1950s British seaside town, mixed with a touch of grim British industrial.

Imagine it picked up and dropped onto the African coast and simply left.

The genteel charms of British seaside life becomes something rather more colourful.

That is East London. Locals call it slummies.

Many older locals seemed a little confused by it all. I met an elderly man, sitting on a bench gazing out to sea. Was he searching for something? Were there better days out there, beyond the horizon?

Next day I saw him back there.

In the pubs too you find locals sitting at the bar staring into their brandy and cokes ... looking for answers. The same people are lined up again the next day ... still needing answers?

Despite the hard times I sort of like East London. Plus, they've a few absolutely gorgeous beaches, which will make you forget that you are even in a city - as will the giraffes, I'll talk about them later.

It's Not Cape Town

None of that fanciness, bling and pretentiousness you'll find in some parts of Cape Town.

In East London they are down to earth, friendly, humble and modest. Even better, they have a great sense of humour. Younger locals laugh at their funny little city; the way they call it slummies , you just know they simply love the place.

Watch Out Where you Stay! 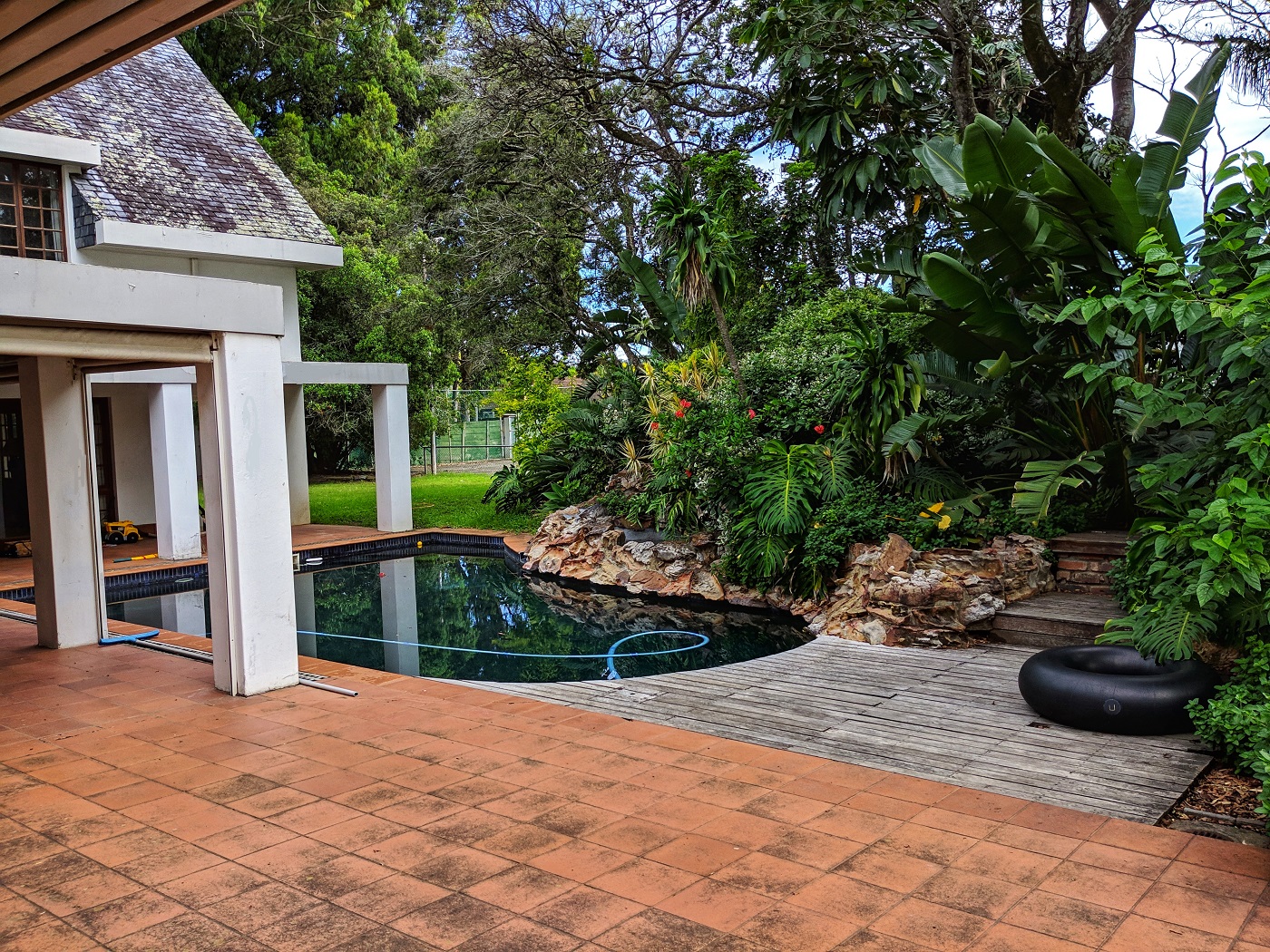 If you've never been to East London you'd imagine that the main waterfront area, called Quigney, would be great. After all it is where you'll find most of East London's hotels.

Well, it is far from great. Bit of a dirty old dump actually and run-down as are the beaches. There are much better beaches elsewhere in the city, which we'll write about further down the page.

The hotels in the area seem geared to conferences, although why any right minded company would ever hold their conference in this area and in hotels with appalling WiFi is beyond me.

The WiFi at the hotels I visited: the Kennaway, Osner and Premier Hotel Regent, is beyond bad or non-existent. The hotels themselves match the area - with faded charms and well passed their best. Read the reviews on TripAdvisor if you don't believe me.

Now that we've ruled out Quigney where does that leave us?

Well, either just outside of the city and on safari at the Horseshoe Game Reserve (more about that coming up) or in the beautiful suburbs of Nahoon or Blue Bend. The options we like here are Stay @ Flamingo Road or the Lighthouse.

So What is to Love?

Another weird thing about East London: it is the only city that has a fish as its most famous tourist attraction, a prehistoric fish called the coelacanth.

The other big attraction is the dodo egg. The dodo is, rather was, an extinct bird from Mauritius, not sure how its 400 year old egg ended up here. Perhaps they are waiting for it to miraculously hatch?

The fossil fish and dodo egg pretty much sums up East London - old fashioned and waiting for better days to hatch.

Actually, the museum is fascinating and really worth a visit. You can find out all the details on the museums's website. 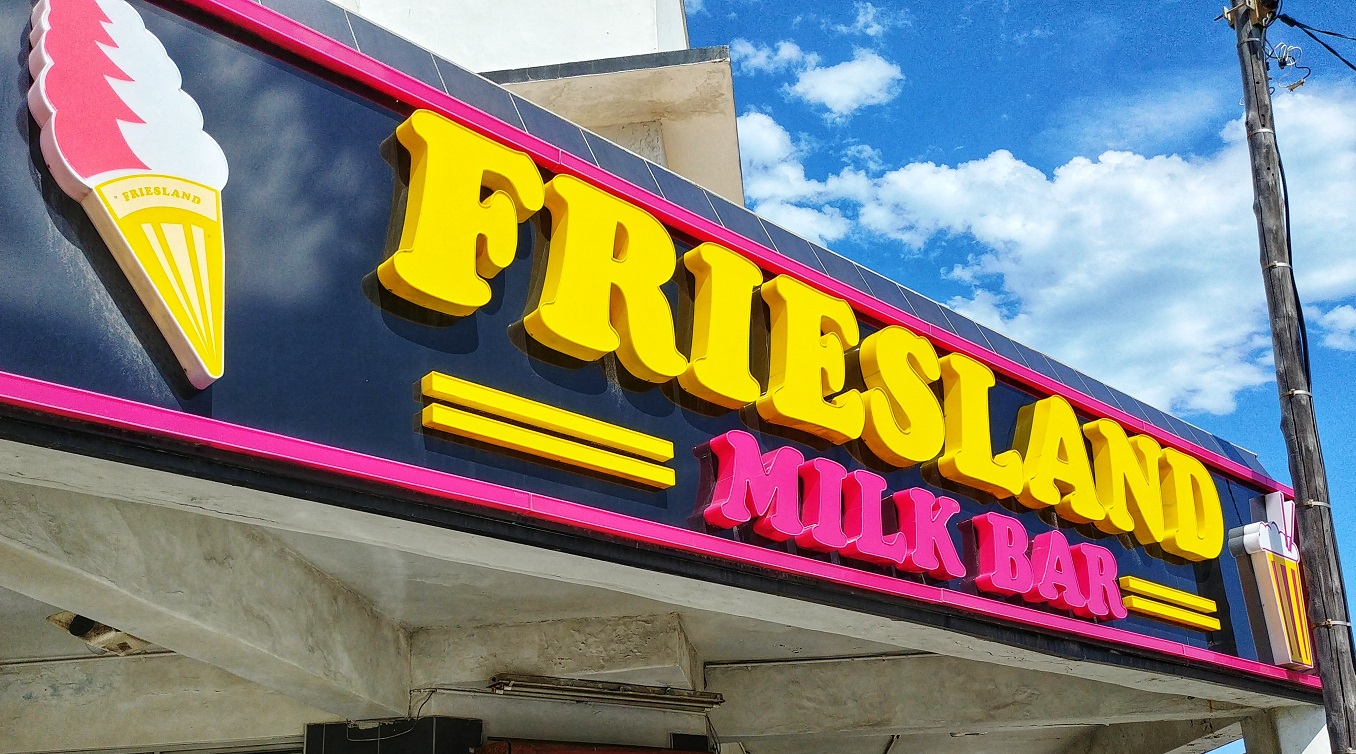 Milkshake heaven awaits you at the Friesland Milk Bar.

It has been around for as long as anyone can remember and East Londoners will tell you that the one thing East London does better than anywhere else is milkshakes.

Once you've tried a Friesland Milk Bar milkshake no other milkshake will ever quite satisfy.

They've a fancy upmarket branch in the Hemingway's Mall, but I prefer the original hundred-year-old milk bar in Quigney.

The place itself  isn't much to look at and their milkshakes come in funny plastic bottles; however, they are ooh la la.

A Safari on the Doorstep 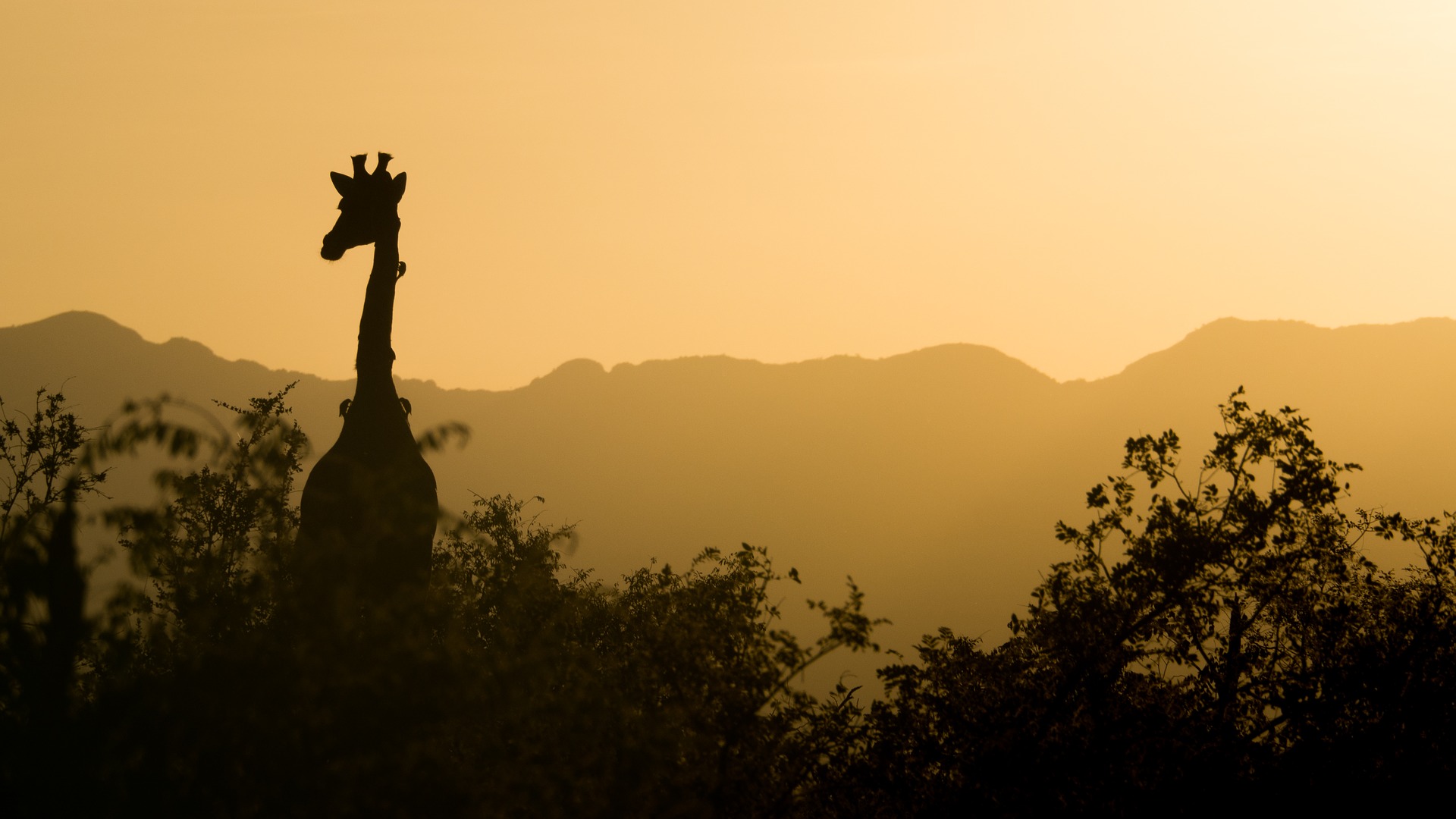 Imagine, sitting on the deck of your chalet, sipping wine, watching the sun slowly set over the African plains, when suddenly a giraffe pops his head over the nearby forest canopy.

Imagine all that on the doorstep of the city.

In most places it would be impossible. In East London it comes true.

Just book yourself a couple of nights at the Horseshoe Game Reserve and feel the stresses of modern day life fall from your shoulders. It seems impossible to believe that there is a city only 25 minutes drive away.

Okay, there's no WiFi, no television either... but who cares! There's National Geographic appearing on your doorstep.

You've everything you need: BBQ facilities and a fridge to keep that Sauvignon Blanc chilled.

So get yourself some boerewors (a South African braai specialty), a few bottles of local Diemersdal Cabernet Sauvignon and some biltong  snacks (another addictive South African tradition)  and find your inner peace amidst nature.

I prefer the chalet option, but, if you don't mind roughing it a little, try the budget tent. Oh, and rather arrive in a SUV/4x4, one with fairly good ground clearance, a sedan will struggle.

Fabulous Dining for A Song 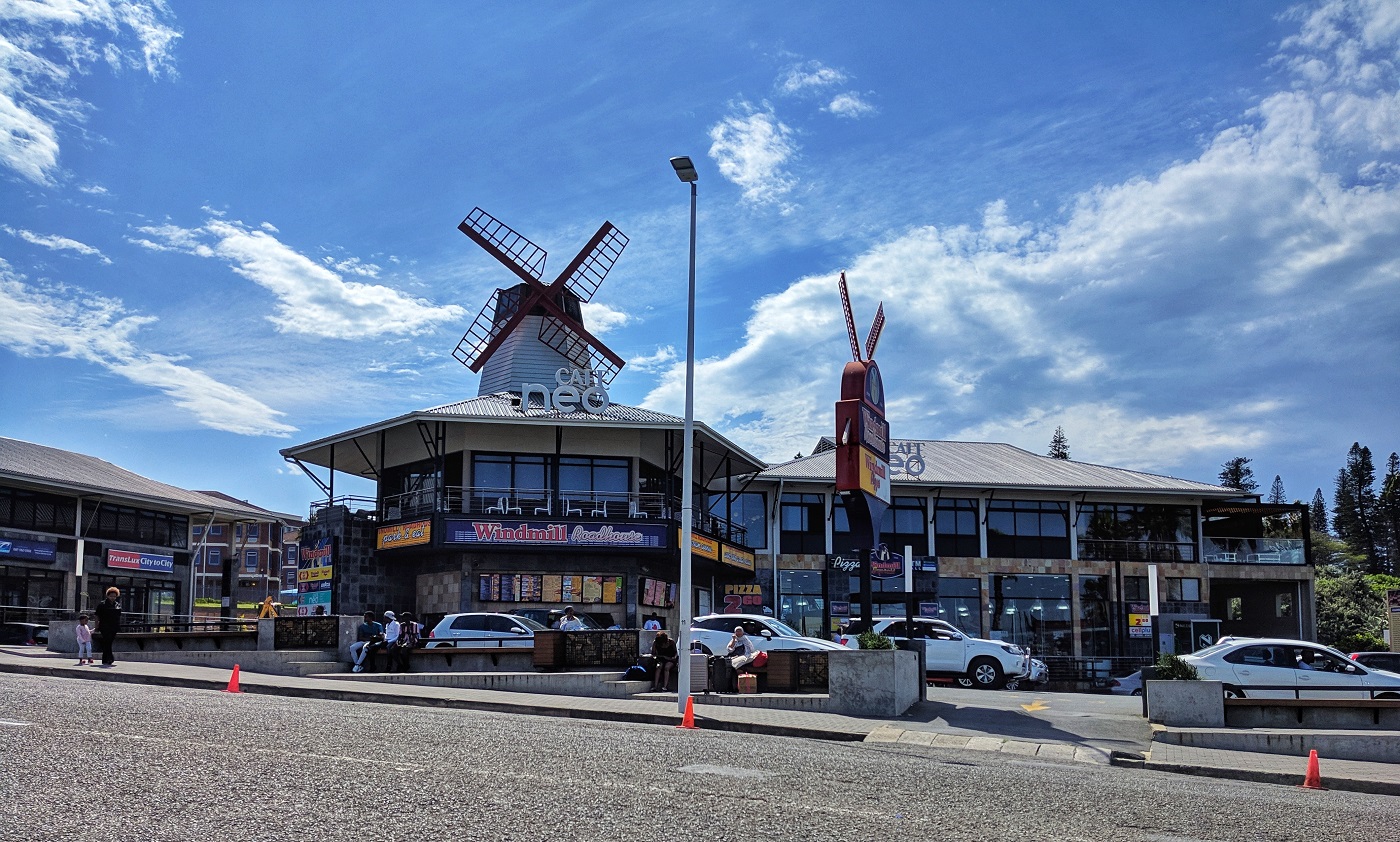 East London seems to be about good wholesome food in huge quantities at bargain prices. I love that!

Where do you start?

Well, you absolutely must visit The Windmill in Quigney for nostalgia's sake and for good food at old fashioned prices. The Windmill is an institution and one of the last remaining roadhouses in South Africa. You'll even find Dagwood sandwiches on their menu -  something I hadn't tried for years and had largely forgotten even existed. Nice to head down memory lane.

For breakfast or lunch try The Beach Break; it's just off Beach Road at the entrance to Nahoon Beach.

I love this little place and it always gives me that holiday feeling. I must be in a nostalgic mood after my Windmill visit because this place too takes me back and reminds me of the Neighbours TV show - way back when there was Kylie Minogue in it.

I recall her working at some sort of cafe with young surfers dropping by; well this is like that: get there in the morning and you'll share it with surfers returning from their early morning surf, lots of very chilled young people and families sipping milkshakes and cappuccino while their children play under the shady Milkwood trees .

Lavender Blue is also a good breakfast/lunch option, it has a rustic farm style feel to it and there's a market to browse afterwards. Helps to work off the breakfast. Being beach mad I prefer The Beach Break but I can see why locals rave about Lavender Blue.

Okay, we've covered breakfast and lunch but what about dinner? My choice would be the The Cricketer. They do the best ribs in all of East London and their steaks are good too.

The Cricketer is not the place for vegans or vegetarians though. Rather try the Sanook Cafe or the nearby Irana's Indian Cuisine. 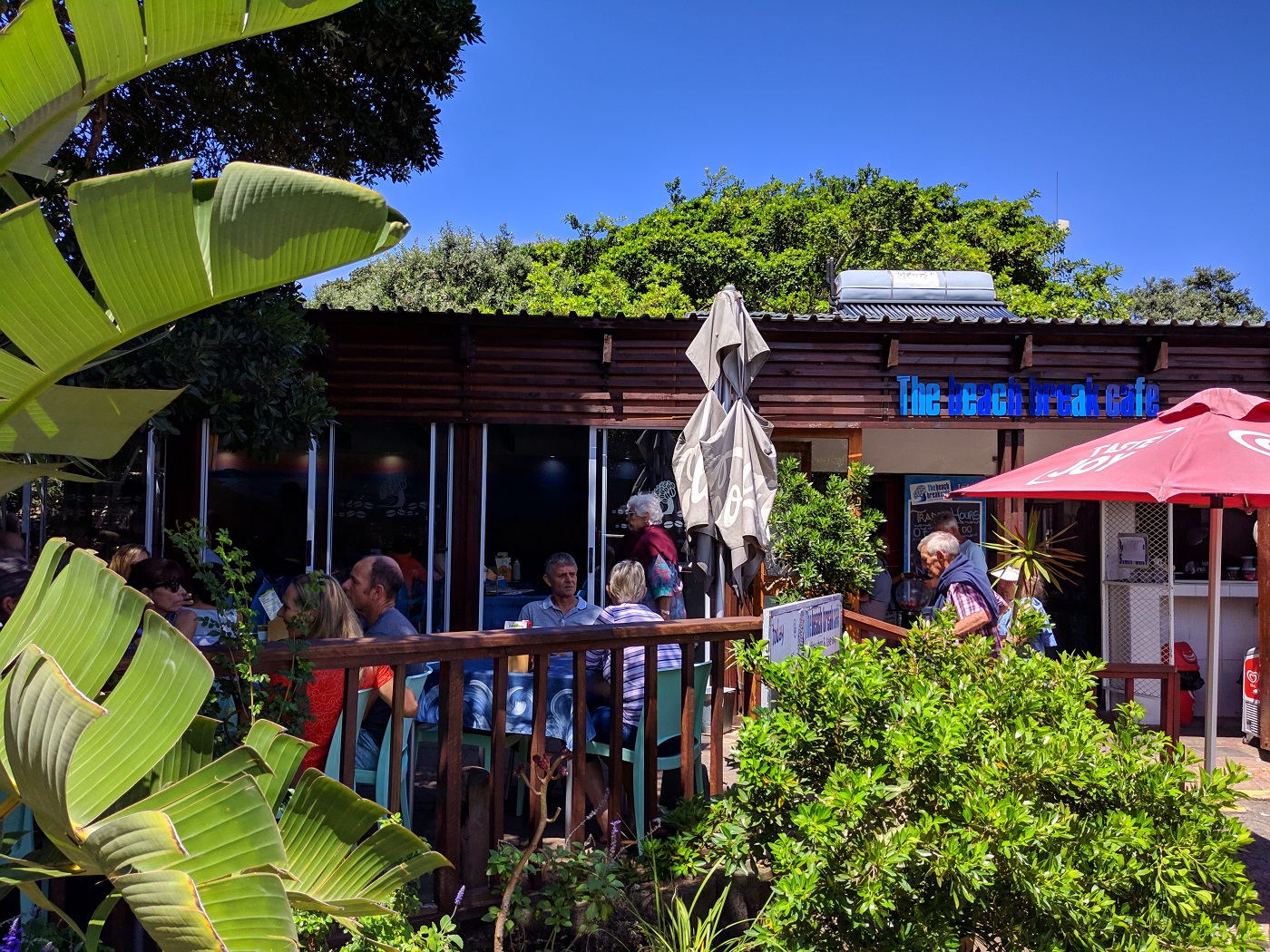 Gonubie and Nahoon are the beaches you'll want to visit ... 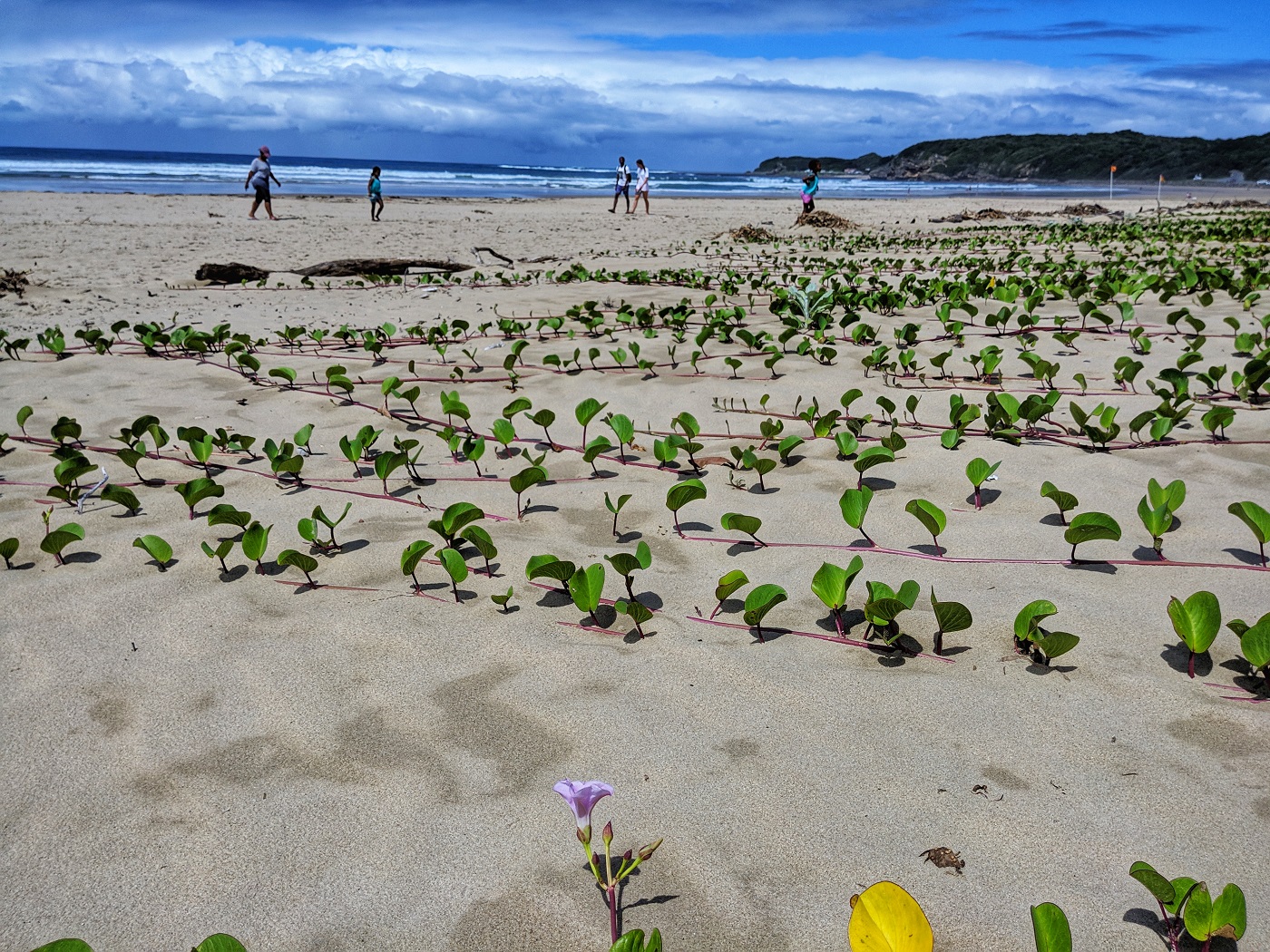 A beautiful beach of endless sand - a real delight. Park outside the Beach Break Restaurant and then follow the little path that leads to the beach. Read the signs about where to swim and about the beach itself as you follow the path, they have a lot of interesting and important information.

On the beach itself there isn't much in the way of service but that's no problem - the Beach Break is a short walk away and there is an ice-cream man who wanders the beach.

Most of the time you'll have endless space just for you - the only time the beach is crowded is December through to mid January. 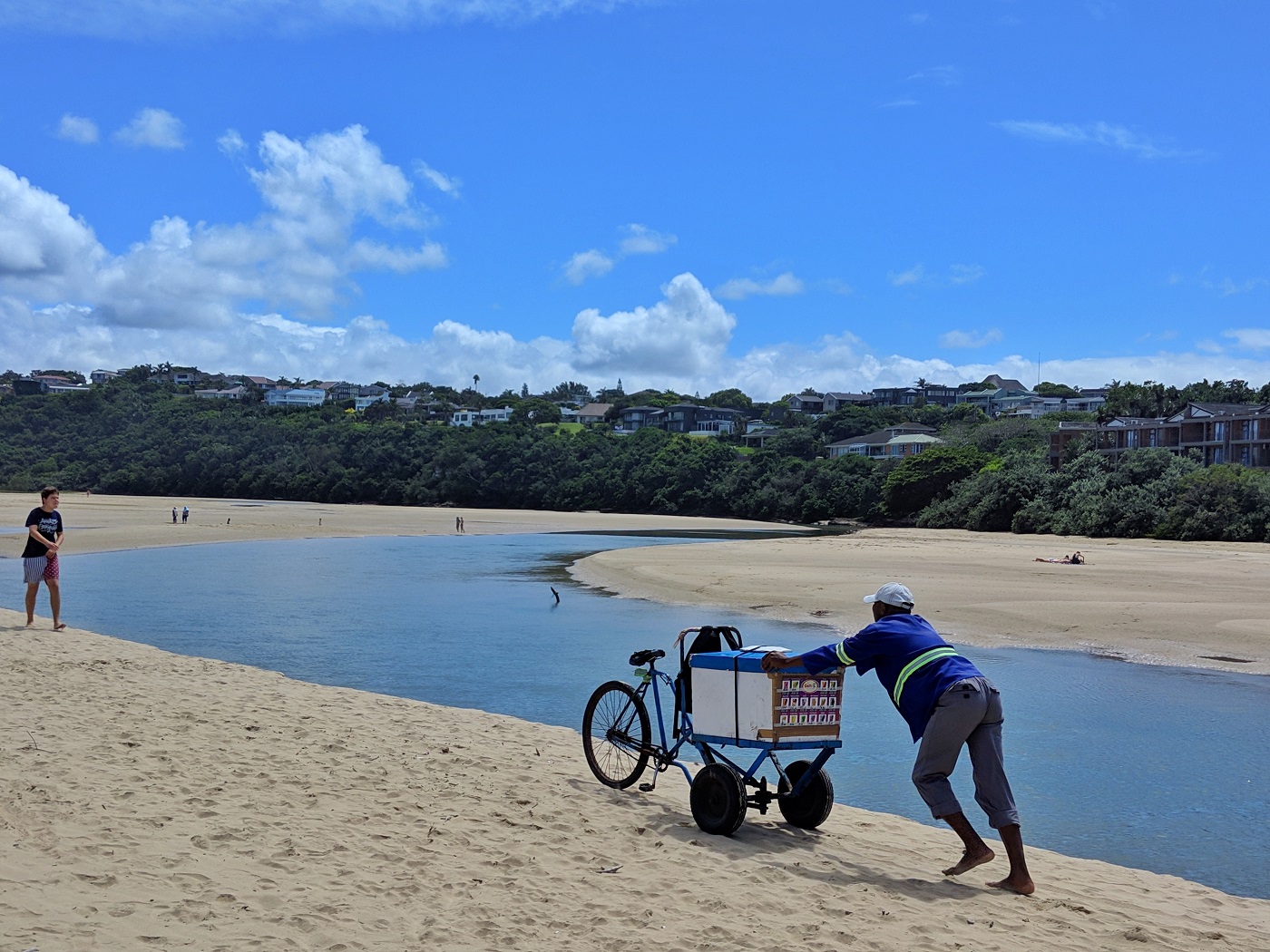 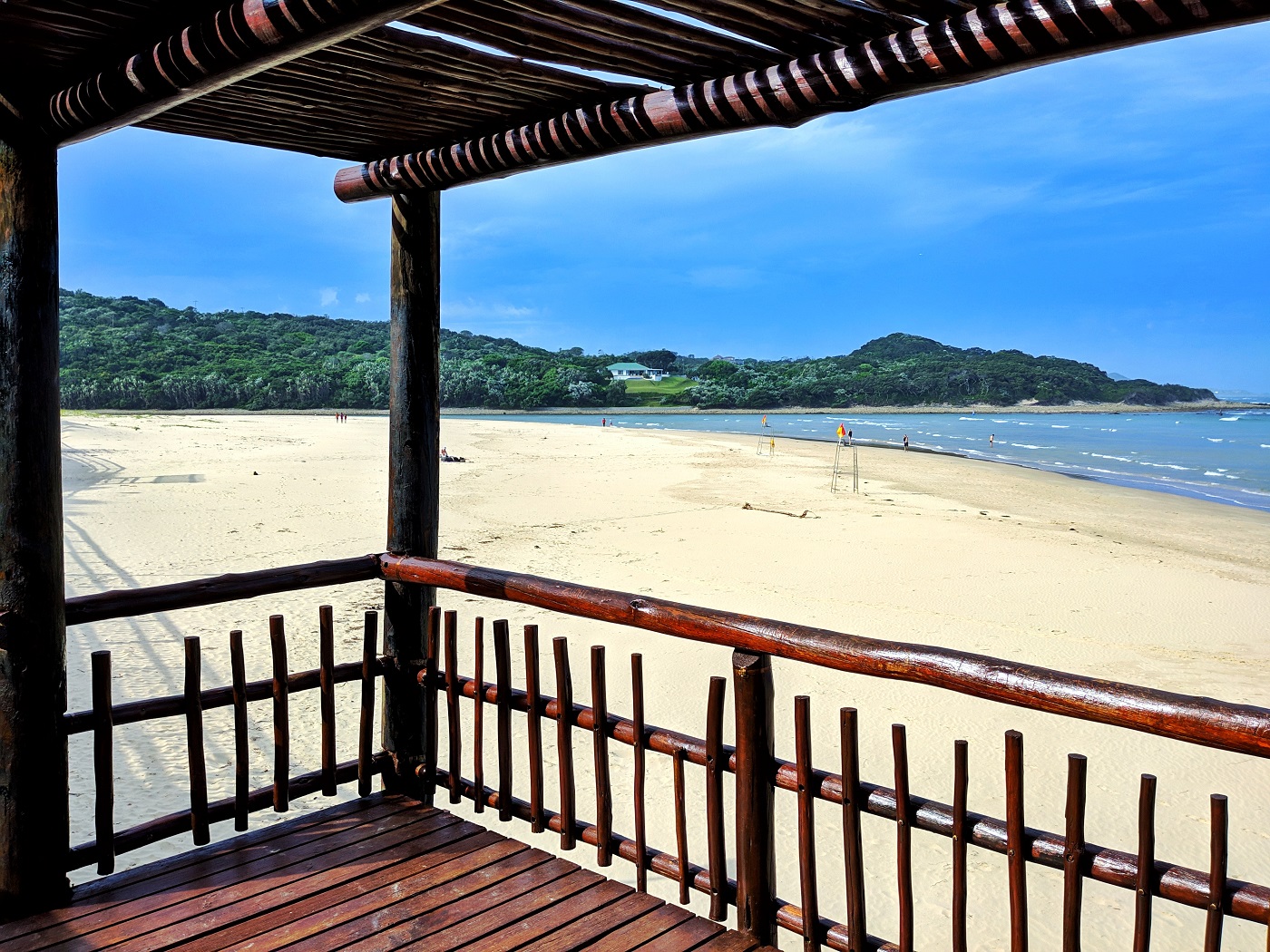 Along the Gonubie Beach boardwalk

A little bit out of town is Gonubie beach and it really feels like it is a million miles from a city. Park in the little parking bay and walk along a wonderful boardwalk that winds its way along the cliffs, over the rocks, to the beach.

There are normally lifeguards on duty and they place flags on the beach to mark out the area that is safe to swim. Stay withing that area - if you stray outside of it the lifeguards will blow there whistles to alert you to get back into the safe area.

Like Nahoon, this beach is huge and normally pretty empty, except for December/January.

Other Things to Do in East London 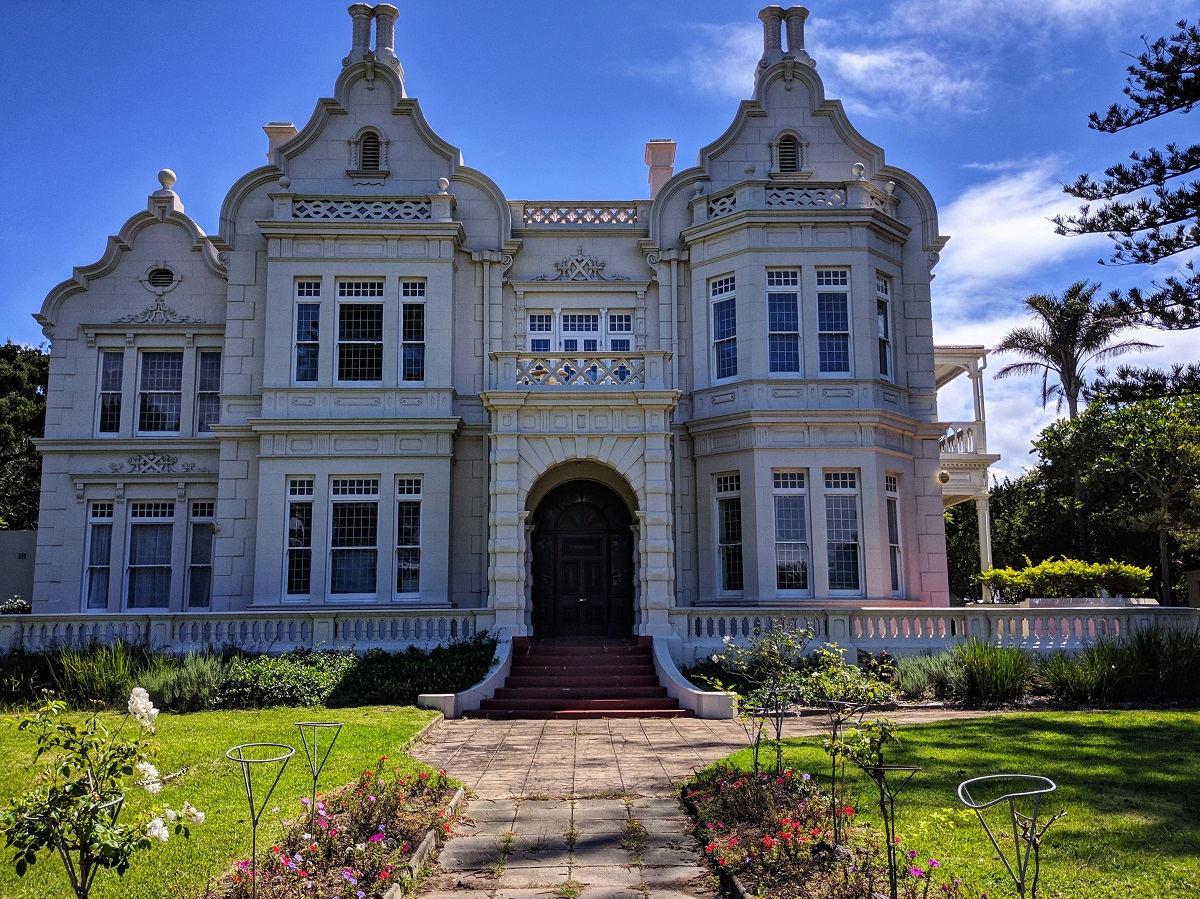 Don't bother with the zoo and aquarium. I feel sorry for them both as they are struggling with limited funding and it really does show. Still, they both try there best and the priority is the care of the animals and fish. If you have very young children they might enjoy the experience and if you feel you want to help them survive then visit..

What else to do?

Well, these are some of the other worthwhile attractions:

Best is to have a car rental and these are the people we recommend. They offer the best rates and we earn a small commission, at no extra cost to you.

You can either fly into East London and pick up a car at the airport or drive from Durban or Cape Town. The drive from Cape Town, through the Garden Route and places like Wilderness and Storms River (LINK), is spectacular.

From Durban it can be a little hair-raising, particularly through the northern part of the Wild Coast where cows are known to wander into the road. Drive during the day if you are coming from Durban.