The 5 Most Spectacular Coastal Drives on Earth

Each of these 5 spectacular coastal drives should be on your bucket list. Add at least one to your future travel plans... you'll be so glad you did.

It was really hard to decide the ranking and, except for number one where all of us agreed, the positions were not by unanimous decision. Go visit, make up your own mind... and let us know.

The Amalfi Coast from the Santa Caterina Hotel - click for more info.

One of the scariest of drives with crazy Italian drivers doing crazy things.

If you don't want to drive yourself take a bus; the buses aren't for those of nervous disposition though - the ride consists of crazy lurches around sharp corners, while holding on tight to your seat and hoping the bus doesn't fly out over the sea.

So why did this coastal drive win?

It's far less "wild" than any of the other drives we feature but the combination of spectacular cliffs covered with olive and lemon trees, the bluest sea of all and around every turn a medieval village makes it unbeatable. More on this coast here.

This one is like a wilder version of the Amalfi Coast. The first bit, through the upmarket suburbs of Clifton and Camp's Bay, is very similar though - just that the oldest building here is maybe 200 years old compared to 900 on the Amalfi Coast.

Still, the beaches are better than those on the Amalfi Coast with beaches like Clifton being rated among the top ten in the world. Camp's Bay Beach too is spectacular, with the Twelve Apostles mountain peaks rising up like sentinels, rows of palm trees parading down the beach promenade and the beach itself looking all white and lovely.

The most famous part of the road trip is the section called Chapman's Peak Drive: here the Atlantic Ocean crashes against sheer cliffs that plunge vertically into the water, baboons scamper about the rocks above and whales can often be seen offshore. Driving this section was one of the most incredible experiences of my life - especially the bit where you come around a bend and far below you stretches the great expanse of Noordhoek Beach; where racehorses train and appear only as tiny black dots on a vast canvas of white sand.

The last part of the drive to Cape Point is through a nature reserve in which zebras, ostriches and antelopes roam while seals lounge on the beaches. The end of the road marks the end of mighty Africa.  As you look southwards towards the Antarctic, and watch the huge waves of the Indian and Atlantic Oceans meeting in fury, you really do feel that you've reached the ends of the earth. The penguins, sunbathing in warm sunshine, on nearby Boulders Beach only confirms that feeling.

The best way to enjoy this drive is to start from Seapoint in Cape Town and head along the coast from there - here are the details of the entire trip. 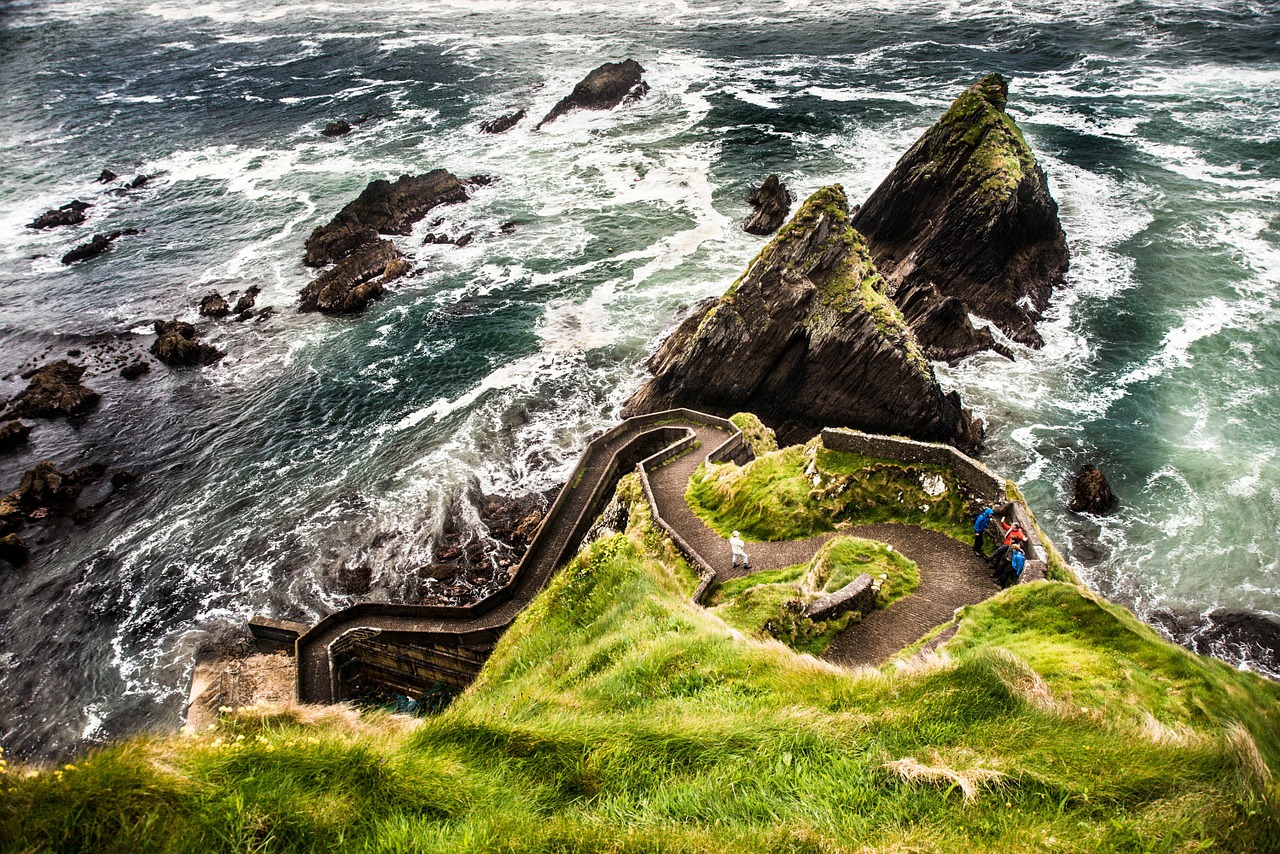 Everything about Ireland is a lot of fun. The Irish always seem to look on the bright side of life and, even if it rains every day, they get out and live their lives with a carefree spirit. That's the best way to enjoy this rather long drive too; don't worry about the weather, come rain or shine(guaranteed it'll be rain) get out there and marvel at the greenery (that rain is good for something), the slate grey ocean and views.

The drive is the longest of all the ones featured; if you do the whole lot it's over 1500 miles. My advice is to focus on the 100 miles of the Ring of Kerry or the less touristed Beara Peninsula.

Funny how two of these spectacular coastal drives have rock formations called the Twelve Apostles - the other one is on the Cape Town drive.

The Twelve Apostles is the most famous of the sights along the Great Ocean Road even if there aren't Twelve Apostles anymore... only eight. The others have eroded away and collapsed into the sea. Don't worry though, the remaining ones are spectacular as they rise like huge sentinels from the sea. Best time to see them is in the light of early morning so make sure you leave really early. If you can't do early morning then sunset is second best.

It isn't only the Twelve Apostles though; the 150 miles of the Great Ocean Road has a bit of everything ranging from beaches to volcanic plains to forests to waterfalls.

Sadly, they have experienced a number of problems with landslides over the last few years and the road has been closed for long periods. It is currently open but check with the official website. 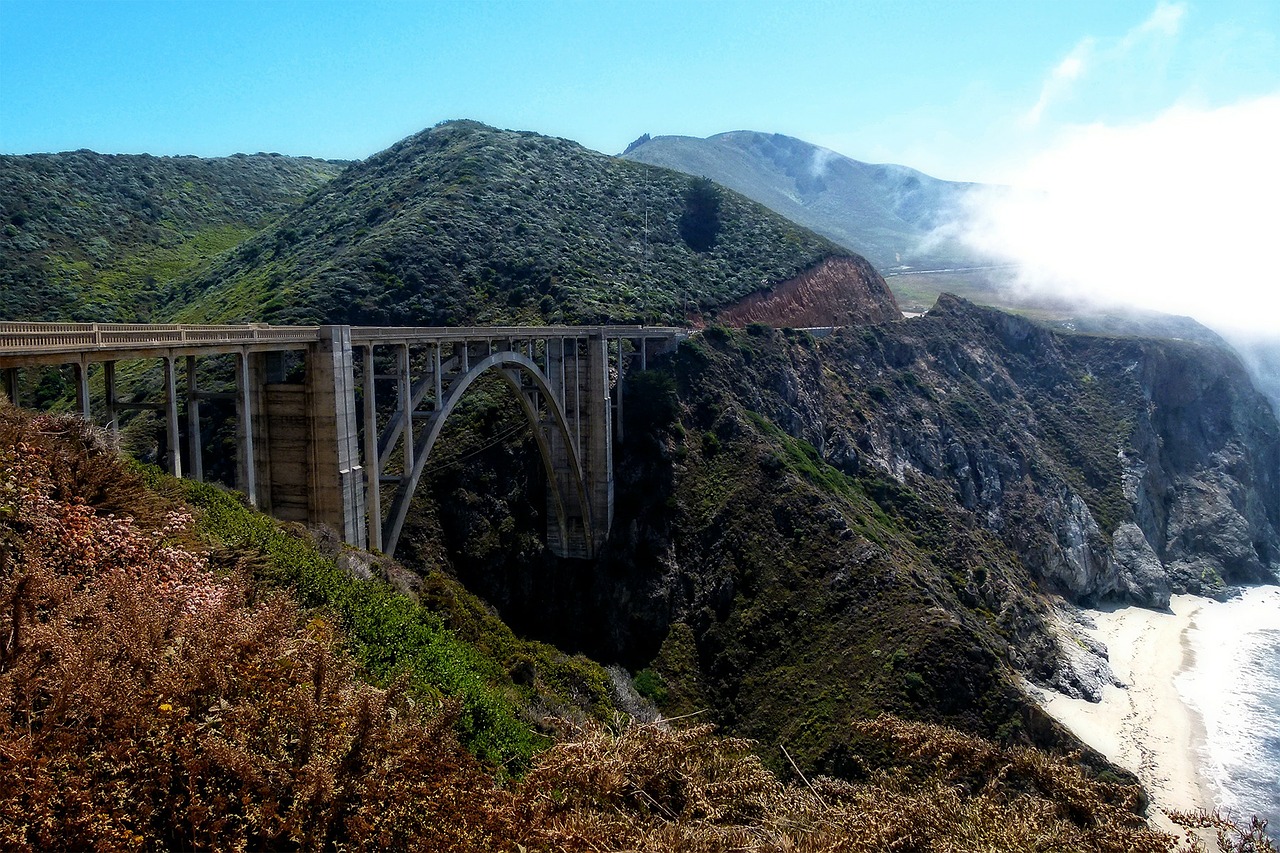 One of the last wild stretches of coastline left in California, a heady mix of fresh sea-air, endless vistas and hidden coves.  Head out north from Los Angeles on Highway 1 and 250 miles later you are in another world. The coast is at its most enchanting when the mists swirl in from the ocean as they often do; the way the spectacular landscapes vanish and then suddenly reappear in bright sunlight is unforgettable.

In a way the whales offshore and sea-lions on the beaches are similar to the Cape Town drive as is the scenery but if I had to choose one Cape Town is definitely the better of the two.

Map of Where These Spectacular Coastal Drives Are