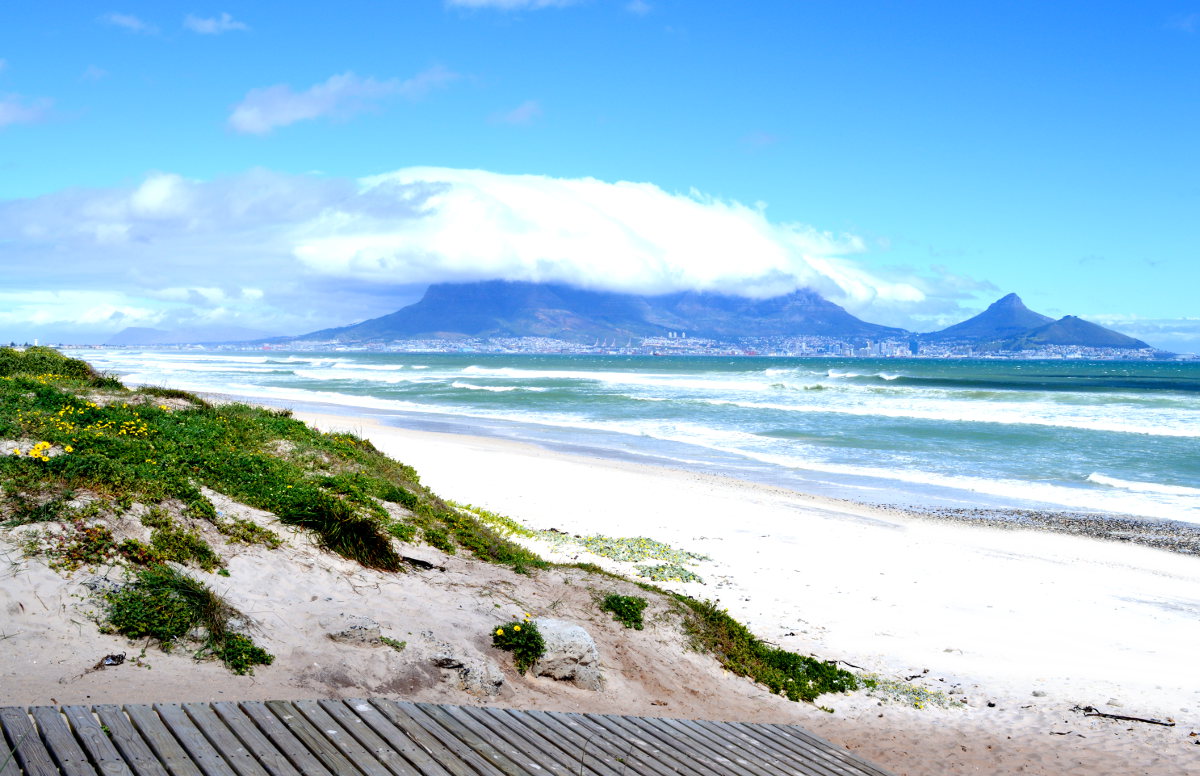 Big Bay Beach & Table Mountain with its "tablecloth" of clouds.

Big Bay Beach is a huge stretch of white sand. Out to sea the view of Robben Island (where Mandela was a prisoner) and Table Mountain, with its tablecloth of clouds, is always spectacular.

Behind the beach there are some incredible sand dunes where the sand is powder soft. During late winter/early springtime the dunes are covered with flowers of every colour. People come from all over the world to see the free flower show that stretches all along the west coast from Big Bay to Langebaan and beyond. 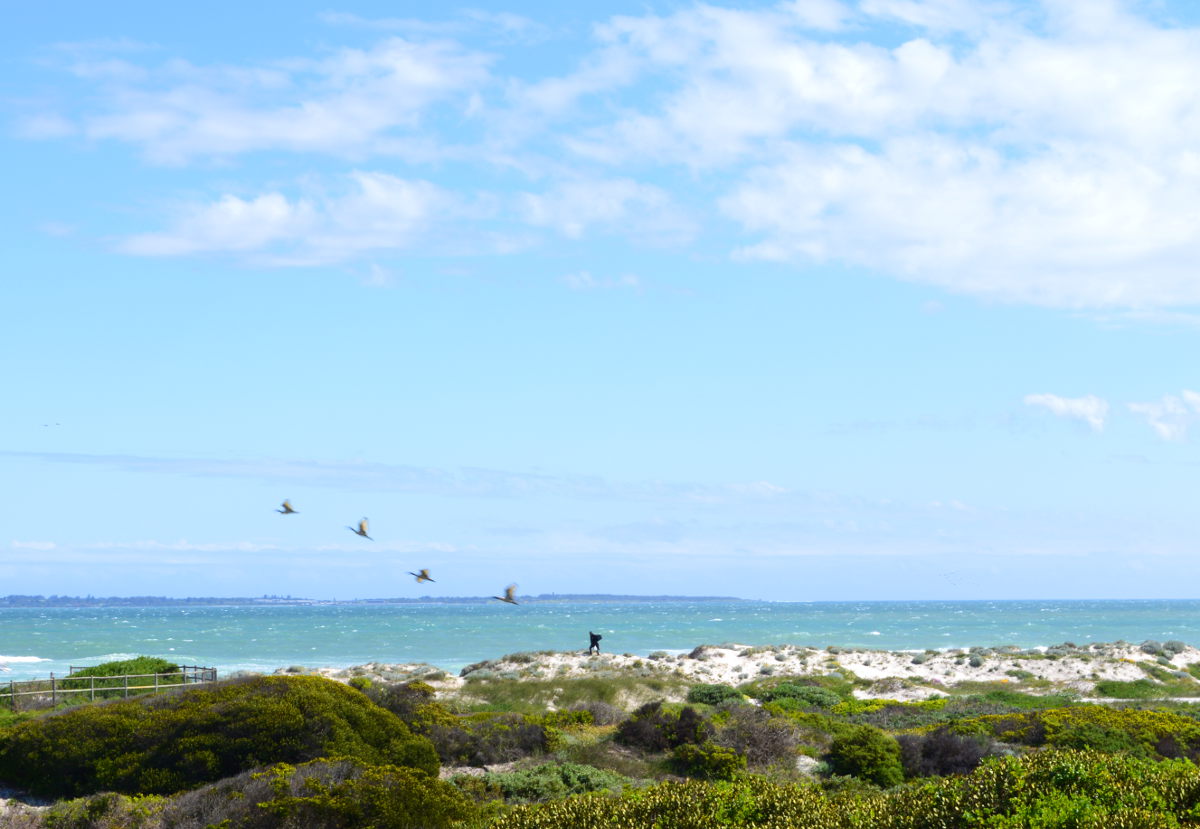 View of Robben Island from the dunes of Big Bay Beach 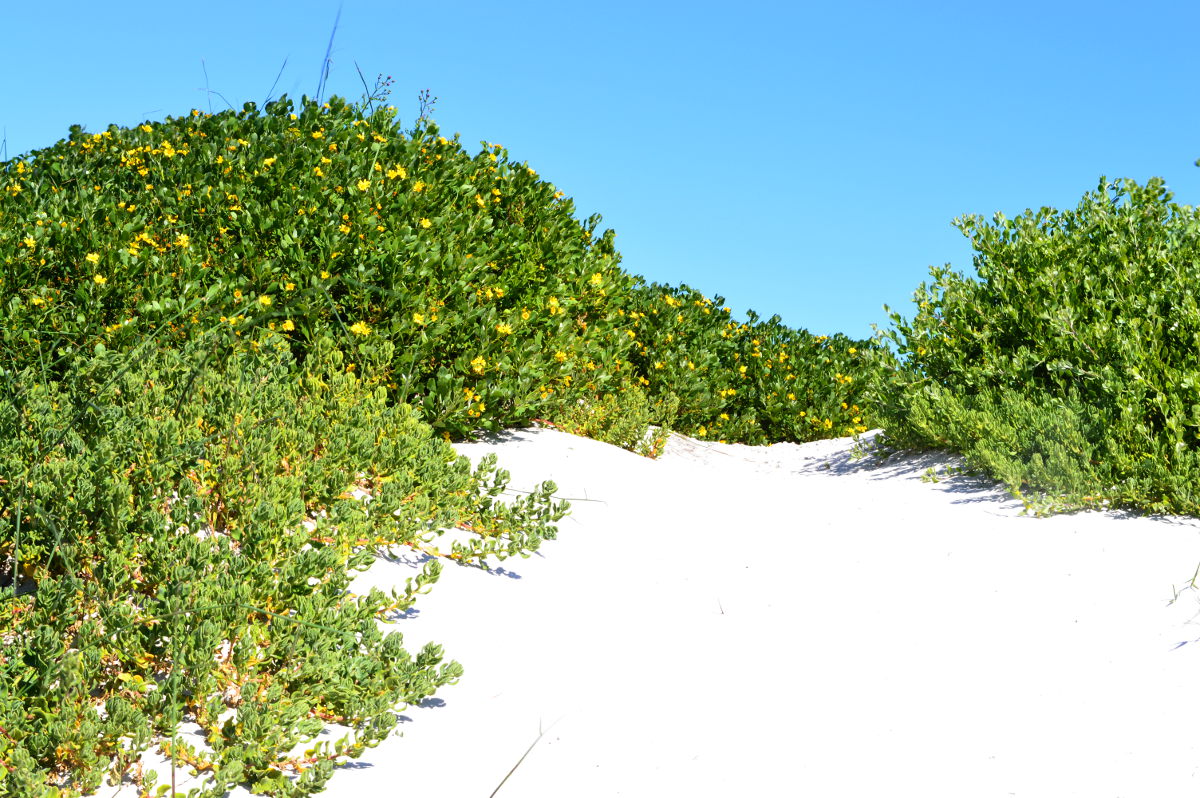 Walk in the direction of Cape Town and you'll come to a rocky area. The rock pools here often have little fish and other sea creatures in them that will keep children amused for hours. There's also an island that can be reached on foot at low tide - just make sure you return again before the tide comes in or you'll be a castaway on your own little island.

Right behind this beach is the wonderful Blue Peter (more further down the page). The Blue Peter is a local institution and a great place to enjoy a sundowner drink or a breakfast overlooking the ocean. It isn't the best place to stay in the area though - the Sir David Boutique Guest House is a much better choice. 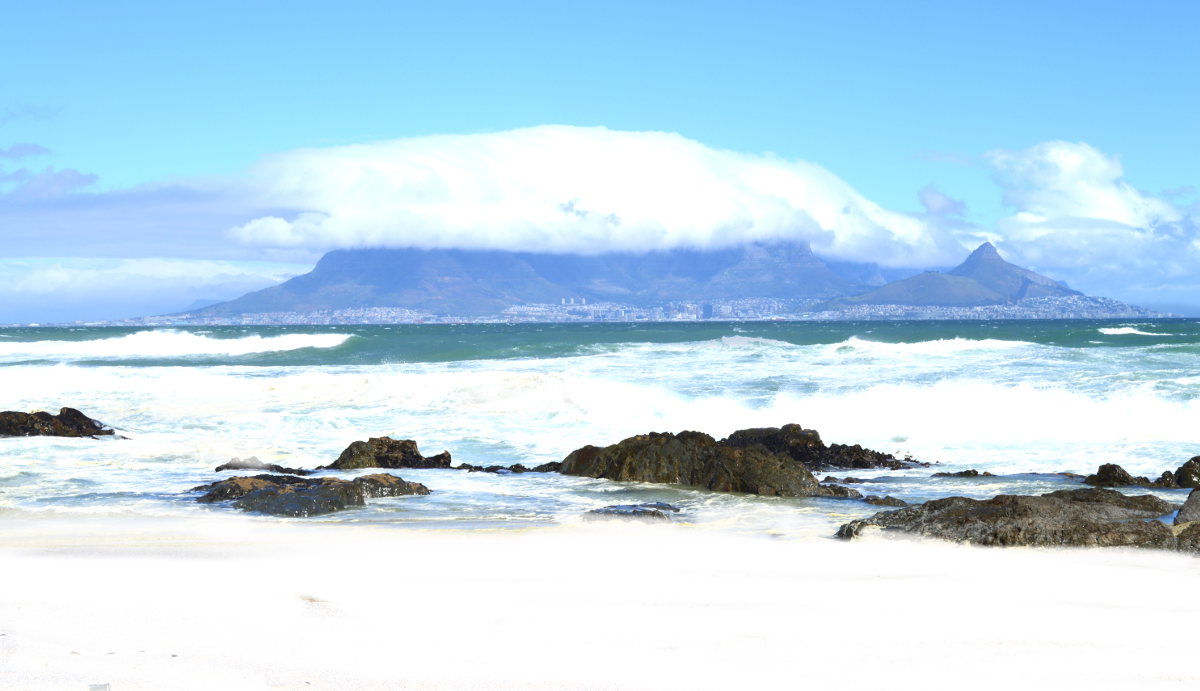 View from in front of the Blue Peter Hotel

Dating back to the late 19th century this hotel is like a British colonial outpost. Paintings of British historical figures and 19th century sailing vessels line the walls, while flotsam and jetsam, used as decoration, adds character to the place.

In summer the lawn is packed with people enjoying a glass of wine, cocktails or a cold beer while watching the sunset. Children play on the beach in front of the hotel and the aroma of wood-fired pizza drifts away from the restaurant, across the lawns and out to sea.

Upstairs from the pizza area and bar is a more formal restaurant where you can enjoy a great value breakfast, lunch or dinner with views you'll want to feast your eyes upon forever. 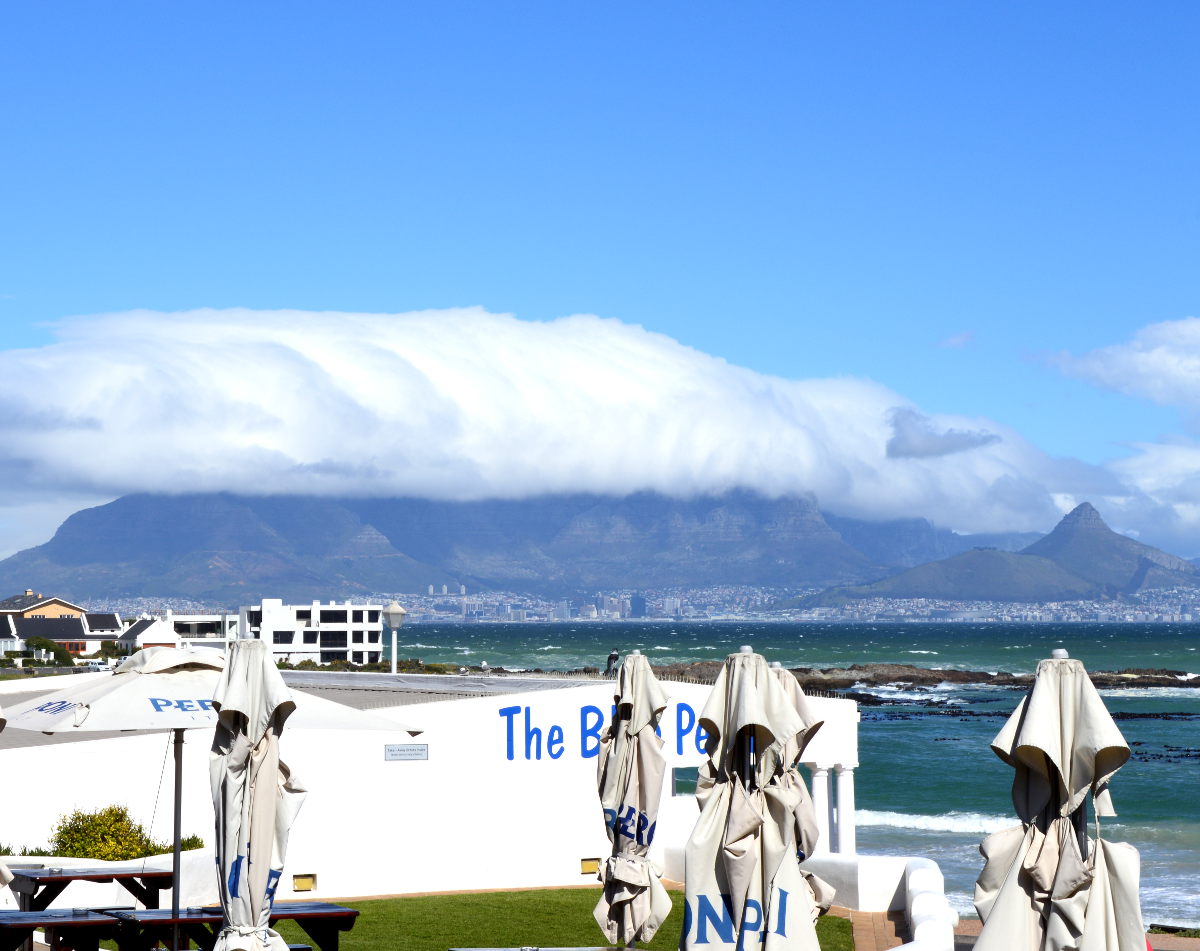 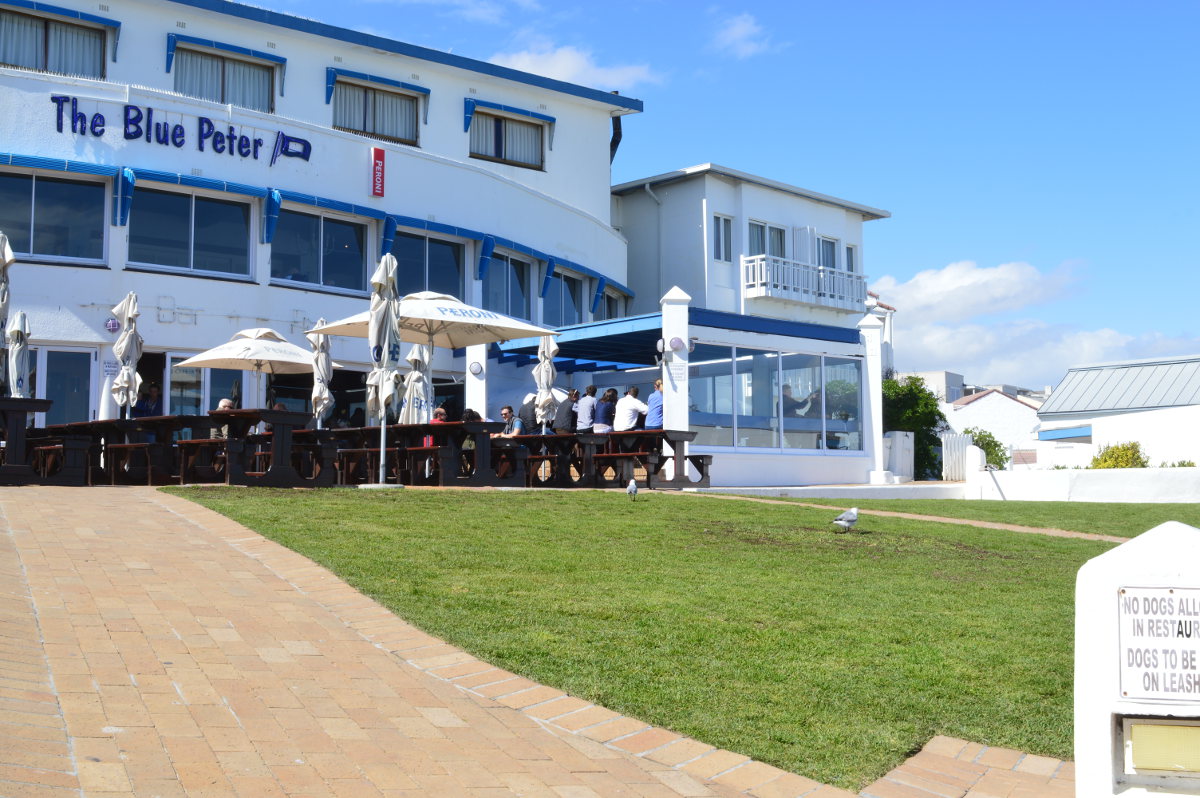 This little old house is one of the oldest building on the entire west coast of South Africa and is right on the water, about a ten minute walk from the Blue Peter in the direction of Cape Town. The setting is fabulously picturesque, with the beach and ocean lying before you and the thatched Ons Huise (our house in Afrikaans) behind you.  It's been turned into a restaurant but I wouldn't bother eating here - the waiters look like they'd rather be sleeping and service is appalling. The food pretty much matches the service levels. Rather eat at the Blue Peter.

Where is Big Bay Beach?