The 5 Best Beaches in Ireland

A list of only 5 meant tough decisions, even when limiting our choice to Blue Flag beaches: considered by an international authorities to be clean, well-managed, environmentally savvy and safe.

Water quality is considered by that authority too… but that doesn’t mean the water’s warm. This is the Atlantic. The water is … invigorating… even on hot days. 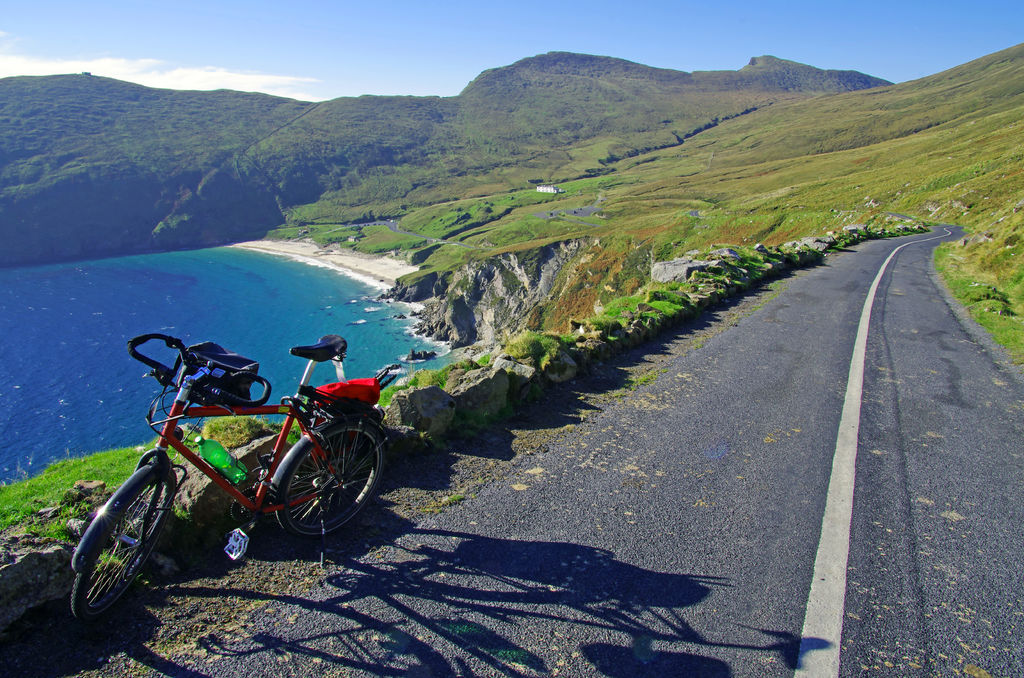 The criteria for these best beaches in Ireland is based on scenery, surroundings and the beaches themselves. One or two are adventure hotspots… so pack your boards, kayaks and wetsuits, and prepare to revel in the best waves Europe has to offer.

Surfers please note: you’re unlikely to be addressed as “dude” out here.

Tucked away in an impossibly picturesque nook of the Beara Peninsular, Ballydonegan is NOT a surfing hotspot.

It’s the most remote beach on our list, the least frequented, the most hidden, and is really quite special, with delicate rock pools in which to discover exquisite shells and sea creatures, and fine quartz sand on which to spread your picnic blanket.

And it’s SO quiet. You’re just a couple of miles from town but it feels like a million. If you want to get away from it all, and be in nature, then this is the place.

Not much in the way of facilities, but the loos are in good order.

These are two beaches that are literally back-to-back (and equally stunning), having formed on either side of a ‘tombolo’: a narrow neck of land linking a headland to a mainland.

Dog’s Bay is a mile-long near-perfect crescent that – like its neighbor – consists of finely crushed seashells. Both beaches, then, have a very white look, a sharp contrast to their attendant blue-green bays. Both are sheltered and safe for swimming: ideal for buckets and spades, and for watersports.

Like children, kayakers and windsurfers are a common sight here… and Gurteen, especially, is a hit with wave-jumping kite-surfers – amazing to see the height they get.

The green headland and neck are perfect spots to stretch the legs and take in the various ocean views.

Essentially, when you do arrive in Connemara, you simply MUST drive out to Roundstone and come down here, if only to dip your toes.

One of Ireland’s best-loved beaches can get a tad crowded on a hot summer’s day. But if you’re used to hot-spots in the Med, forget about it. Even on its busiest day, finding your spot on Barleycove is a breeze. It’s huge.

So it is a bit of a walk to the eastern end.

From the car park, the beach is reached via a boardwalk; or you can take the path along the top ridge, spy that perfect spot, and scramble down. Bear in mind, there are no facilities apart from toilets, so you’ll be carrying the cooler box along with the deck chairs and umbrella.

But it really is worth it. The water is warm (for Ireland), there are no dangerous currents, and lifeguards are here through the holidays.

Barleycove is also the perfect place to brave the weather and enjoy the more rugged aspects of the Irish coast – the classic wet, desultory beach-walk is had on Barleycove… as shared with determined joggers and delighted dogs. 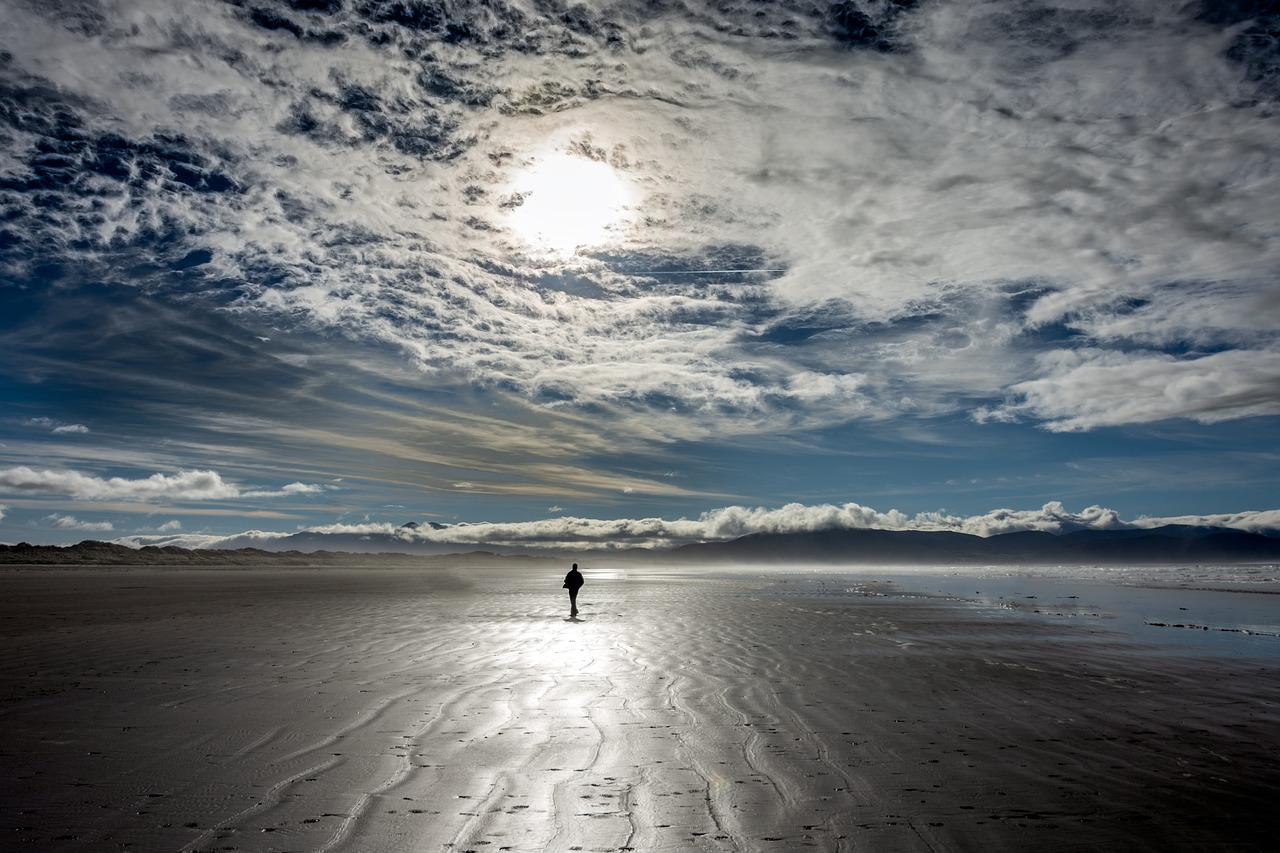 Take the Barleycove experience and double it. Don’t be misled by the name. Inch Beach is 3 miles long and wider than many beaches are long: a vast tract of unbroken white sand, where horses and riders gallop past and disappear into the distance.

Inch is not known as a pretty beach, but it is tremendously utilitarian, which is to say it’s a multipurpose space used for every kind of beach activity you can think of, off-shore and on-shore.

The joys of Inch are no secret, so yes it does get busy during the few weeks of summer, and the cars line up on the beach itself.

But even 50 cars are dwarfed by the huge expanse.

And given that it is on the remote Dingle peninsular, it is empty more often than not. Then one gets to see the Emerald Isle for the stark place it can be: grassy hills, rocky outcrops, distant cliffs, misty mountains, and the endless Atlantic. 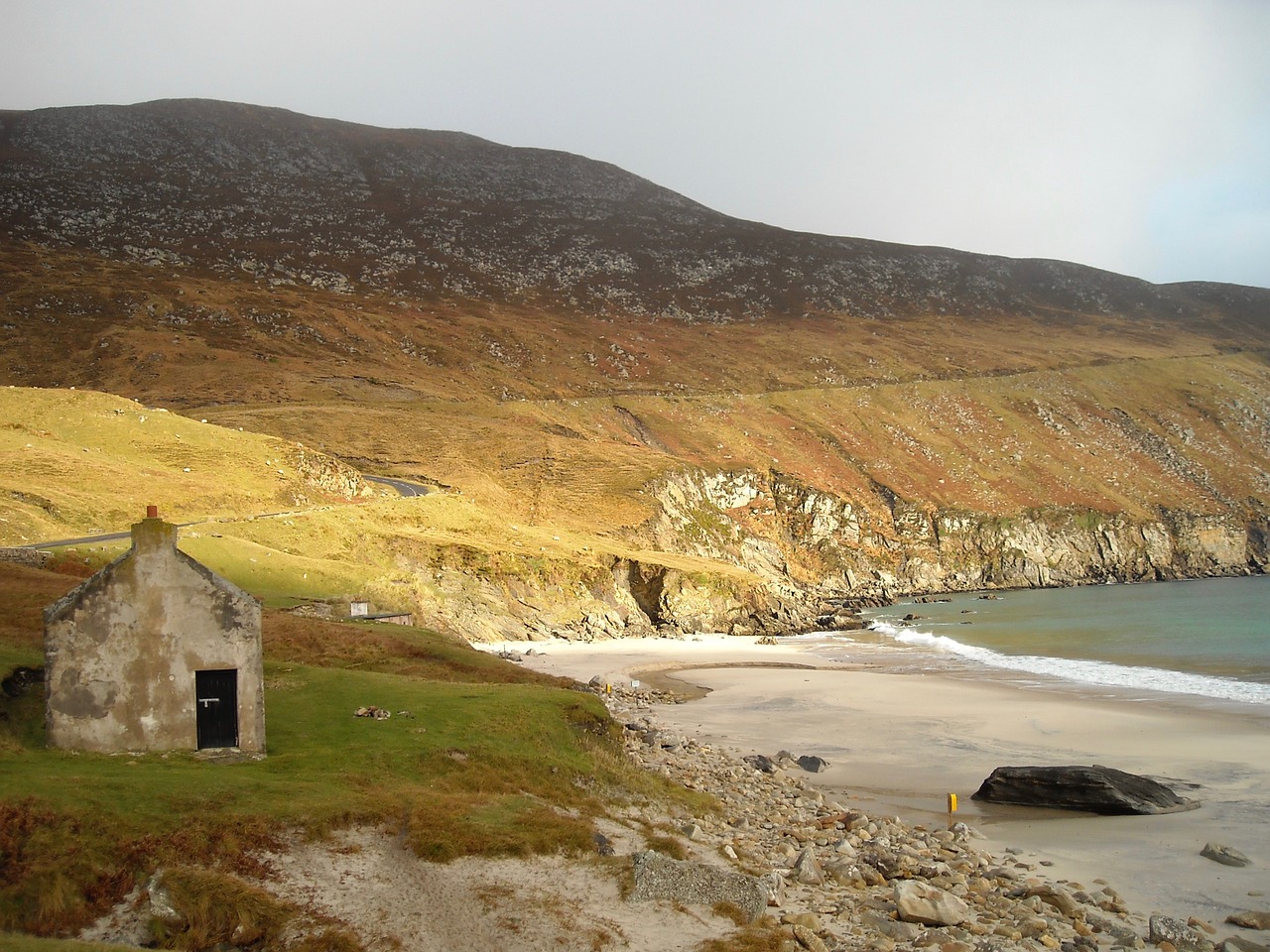 We thought to extend the theme of vastness, and end with Keel Beach on Achill Island – the best-known beach in a lesser-known part of Ireland.

In the end, though, we left the surfers to their big waves and came 5 miles west of Keel, to Keem beach: smaller, less frequented, more golden, and skirting a bay that, to me, is most reminiscent of the Med.

Except that the deep azure of the Med is replaced here by pristine-clear turquoise … not that one can pin down color in Ireland. The light in this country is still a mystery and still amazes me. It changes on a minute-to-minute basis, as do the colors.

Nowhere is this kaleidoscope effect more apparent than on Keem, where the viewer is mesmerized by rolling hills, shimmering waters, and distant cliffs.

Flying a Blue Flag, means Keem has facilities. But they are minimal. At busy times, food and ice-cream trucks are parked close by. At other times Keem Beach caters more to those who enjoy being cut-off, without a care in the world

… and that is where we leave you.

For more on how to get to these stunning beaches, see our various articles covering Ireland’s wild west coast.