There’s a lot to like about Westport Ireland: scoffing the best club sandwich in Mayo county (at the Clew Bay Hotel); the magnificent Clew Bay coast; the 99 cent ice-cream at McGreevy’s; a pint with the regulars at Matt Malloy’s; the live music at McGings; and the pizza at the Woodfire. 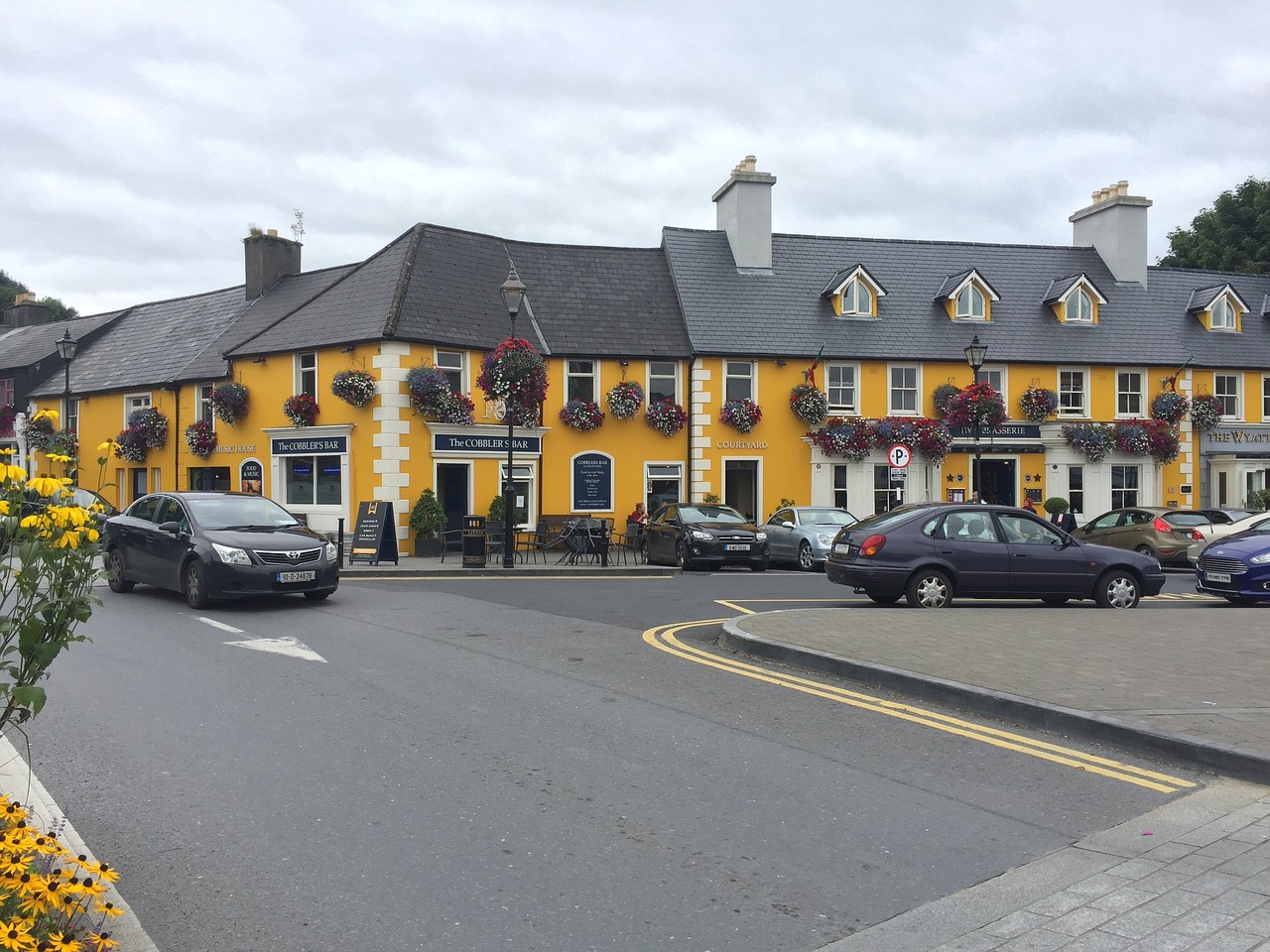 But my favorite things about this town are its bridges and river.

I LOVE the bridges.

Not only in Westport, but in Galway, Sligo, Limerick and Cork (which has a whopping 20 bridges). They were all established at gorgeous green river mouths, and many’s the time I’ve stood on an Irish bridge, marveling at how the rivers shape their looks.

In the case of Westport, that look is gorgeous.

On a nice day in Westport, all I need is my tea and a crossword, and a spot at one of the cafes on the Mall… which is quite special. It comprises two tree-lined promenades on either bank of the Carrowbeg river. The retaining walls are decked in flowers, and the shop-fronts down the length of the promenade are like paintings on a wall.

… is called the Octagon, because, well, it is octagonal. Dominated by its central statue, and decorated in flowers, it is the site of many a music festival and much gaiety. Being an Irish town, the sounds of strings and pipes are never far away.

In Westport they say that when God made time He made plenty of it. This is not a town in a hurry—Not that it is slothful. Westport is active, busy and immaculately kept, and has, in fact, been voted the tidiest town in Ireland.

The 4-star Westport Coast Hotel is my pick of a bunch of places to stay, for the elegant decor, the flair of the chef, the lakeside setting, and the view of Clew Bay. Wi-Fi and Sat-TV are a given, the service is great, and the spa is, in a word, sumptuous.

More central, but as chic, is the Westport Plaza Hotel, that also delivers the full spa treatment, fully appointed rooms, and bathrooms done in Italian marble.

For a B&B option, our go-to spot is the Helm. Frequented by locals, the pub ambiance is festive, the Guinness cold, the Irish stew hot, and the rooms just fine. A great place, run by friendly folks.

The coast-hugging counties out west are all gifted with wild beaches and rugged country, so the locals all tout their town/city as THE adventure capital. The same goes for food. From Donegal to Cork, the farms grow the tastiest organic produce one could wish for, with each town claiming supremacy of Ireland’s burgeoning food scene – all in a competitive spirit that continually raises the bar.

Westport makes its case at venues like the Quayside Cottage, An Port Mor, and the Murrisk Tavern near Croagh Patrick. All part of the Irish ‘Food Trail': a concept that promotes the restuarants and their locations.

For me, the front runner is the crab meat linguine at An Port Mor, had with a bottle of Cotes du Rone Blanc – a delightful French accompaniment to an Italian/Irish dish.

Westport’s prime location is Wesport House: the town’s stately manor and the reason Westport came about. This prettiest of towns was designed around the Manor and built to house its estate workers. Today it remains one of two iconic Westport landmarks. It’s open to the public and the tour is well worth taking.

Between Westport and Achill Island is a 26-mile stretch of heaven for hikers and cyclists. The Greenway is a dedicated trail, free of motor traffic, making it safe, exhilarating and oh-so-pretty. Bikes can be hired from Clew Bay Bike hire (clewbaybikehire.ie.).

I suggest doing the 9 mile stretch from Mulranny to Achill Island. Athleticism not required. As with the Slea Head Loop in Dingle the route is on the coast, so it’s flat. Just be sure to check the wind forecast.

Westport’s other iconic landmark – although often obscured by mist – is Croagh Patrick: a mecca for pilgrims in times past and present. The trek to the top is part of the tourist ritual (only if you’re fit). Otherwise hole-up in Campbell’s Pub at the foot of the mountain, and treat yourself to a few of their craft beers.

Westport has its 2 Blue Flag beaches: Betra, and Old Head, both on the Louisburg road. Old Head is the pick for me: a little beach with a lot going on: white sand, rock pools, an ice-cream shop, and great views of Croagh Patrick. Or, go west to the magnificent strands on Achill Island

By car, take the N5 and N59. Westport is 50 miles from Galway, 65 Miles from Sligo and 40 miles from Knock Airport; and is also served by Irish Rail and Bus Eireann.