Around the Beara Peninsula

Here at Exquisite Coasts the glass is not half-empty… it’s half-full. And when travelling in Kerry and Cork, it is half-full of stout.

Not Guinness, mind you.

We prefer the unlikely-named and less mainstream Mi Daza: a local craft stout you must try WHEN you come this way. I say ‘when’ and not ‘if’ because the location we’re about to whizz you through is a must-see.

Being glass-half-full types, we assume the best: that when you visit Killarney and the Ring of Kerry, for instance, you won’t be swamped by crowds or stuck behind a tour bus. But that CAN happen… which is why you might want to hop one over, to this peninsular.

Not as mainstream. Just as pretty.

If coming from the Kerry side, your access point is Kenmare, named for the gorgeous bay that separates Beara peninsula from Iveragh peninsula.

Coming in from the Cork side, the generally accepted “gateway” to Beara is Glengarriff, at the head of Bantry Bay: claimed by its residents to be the sunniest town in Ireland.

If that takes your fancy, and makes you want to stay, the Eccles Hotel will accommodate you in fully appointed rooms, a fine restaurant, and 250-year old bar; where is had a panoramic view of the shimmering Bantry Bay.

We stayed at Casey’s Hotel. Family-owned. Homey. Comfy. And fully Irish – both the hospitality and the breakfast.

From Glengarriff, walkers and cyclists begin the trail of The Beara Way (follow the red fish signposts), while motorists – that’s us – zoom westward along the Bantry Bay coast to Adrigole, nestled at the foot of the wonderfully-named Hungry Hill - a peak of the Caha mountain range that bisects the Beara peninsula. On one side of the Cahas is Kerry, on the other side, Cork.

Finding reason to stay in Adrigole, maybe to climb Hungry Hill, I suggest staying at The Hungry Hill Lodge. Their kitchen is inspired by their name.

The road over the Cahas takes one across the peninsular, roughly at its midpoint. The Healy Pass is a winding climb to a panoramic summit vista: hills and valleys, the winding road, a lovely lake, Kenmare Bay, and the distant peaks of Macgillycuddy’s Reeks on the neighboring Iveragh peninsula (Ring of Kerry).

Once seen, not forgotten.

The road then descends, past the lake, taking you to the town of Lauragh, and to Kenmare Bay.

Or you can save Healy’s Pass for later – as we did – and go west, down the Bantry Bay coast, to Castletownbere, with its picture perfect harbor, its Dunboy Castle ruin, and its Beara Coast Hotel. (Smarter than it appears from the outside).

My pick for the peckish is: the battered whitefish and tartar at the Fuchsia Café.

At the very very westernmost tip of the Beara Peninsula… just off the coast… lies Dursey Island … accessible from the mainland via Ireland’s only cable car – possibly the only cable car in the world that traverses open sea, it’s a swinging 250m-high thrill-ride, often in the company of the local livestock, also ferried in this manner for want of an alternative.

On Dursey itself there is a breezy, salty, sea-splashed walk, after which you can say you’ve explored the farthest reaches of Cork. But do bring your own food and water. No shops here.

Back on the mainland, the road to Allihies is a storybook affair, through the classic Irish patchwork of grey stone walls, black-faced sheep, green valleys, barren ridges and rocky outcrops.

Here the Beara Peninsula serves up its special beach: Ballydonegan (see our best beaches feature) and it’s here that I start to think, the Ring of Kerry has nothing on this.

The cliffs are too beautiful for words.

Characteristic of these southwestern towns, Allihies is painted in strong bright colors, that are perhaps a shade less bright than her neighbors. Allihies is remote, and exposed. On the southwestern tip of Ireland, it has the distinction of being the farthest town from Dublin.

The mountain road toward Eyeries serves up the stone remains of a 19-century copper mine that echoes Allihies hard history.

In Eyeries, stop at Rhonwen’s Eyeries Bistro, which may just be the best place to eat on the peninsula. 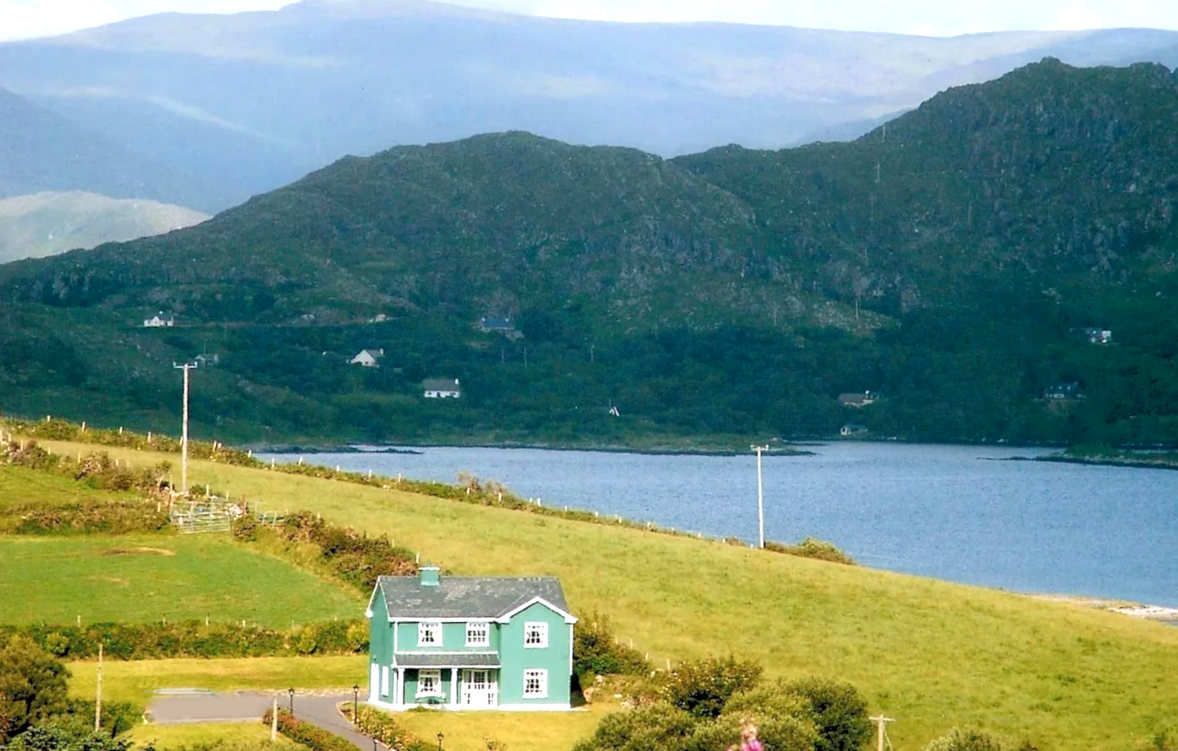 From Kilcatherine we turn east to Ardgroom Village, a tiny scattering of colored cottages.

The center is a main street, lined with the same variously colored facades… and about a mile-and-a-half away, right on the sea, the comfy, cozy, Sea Villa, run by the delightful John and Mary O’ Sullivan, which, simply put, is the best left for last.

Continuing east, back toward Kenmare, visit the Stonehenge-like Uragh Stone Circle, the lakes of Inchequin and Cloonee, and head back to Kenmare or Glengarriff… and you’ll have explored the Beara peninsula.

“Come away, human child, to the waters and the wild.”

For details on how to get here, see our Killarney, Ring of Kerry story.